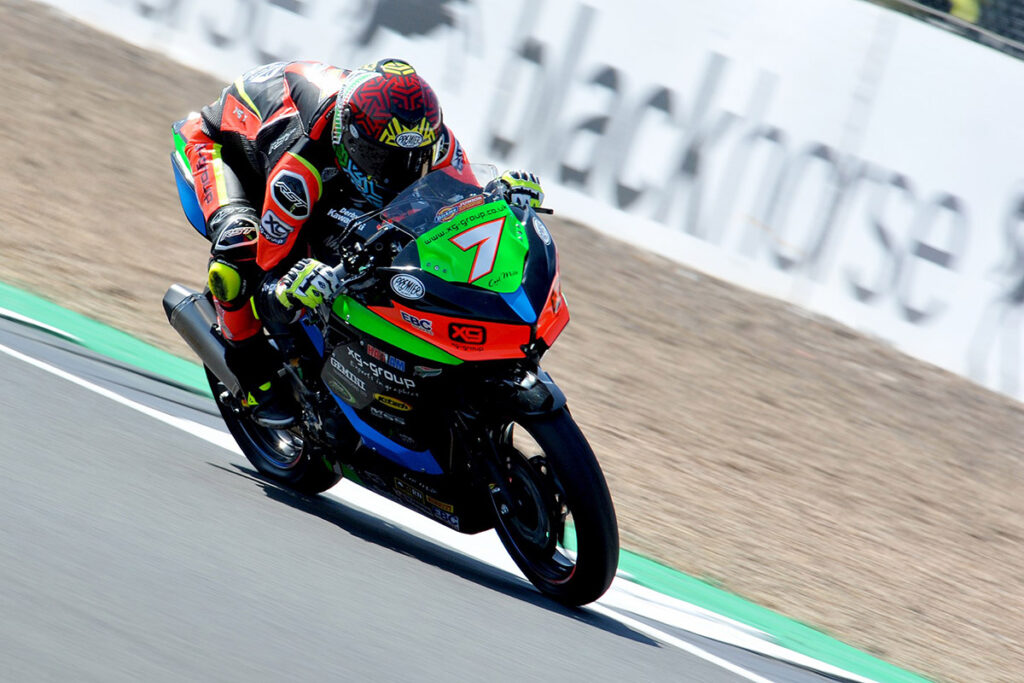 Kade Verwey, who finished fourth overall in the British Junior Supersport Championship last year, came into the opening round of the 2019 season with one thing on his mind – the title; and after converting a front row start in qualifying to two third places in the opening two races he’s put himself right in the mix from the word go.

A steady start saw the #7 squeezed into the first corner before a mature race saw the XG Racing rider regrouping to secure a podium in the opening race of the year.

Race two was held in equally perfect conditions with Kade starting from the second row of the grid courtesy of his race one best lap time. Much closer to the front from the off, Kade set the fastest lap early on, ensuring that he remained in the fight for the win until the flag.

Never more than 0.9s from the lead Kade made several attempts to pass his rivals, narrowly missing out on the top step by the time the chequered flag was waved.

Points make prizes and today’s double podium could well play a part in the final standings at the end of the season.

Kade Verwey:
“I was looking forward to both races after such a good qualifying where I put it on the front row. I kept chipping away at the times and in the end and in the end managed to get a nice little tow. I was provisional Pole for most of the session but got pipped in the final few moments of the session. I knew I had to keep my head and not make any mistakes as it would be a massive fight with several riders in the mix. I got an average start and a bit boxed in at turn one, but I kept my head and settled into a rhythm. Once I broke clear and was in third there was nothing, I could do about the leading two. It was a good result, but I wanted more in the second race where I started on the second row. I made another poor start in race two and got bullied back a bit. I picked them off one by one and then was able to catch the leading two. The three of us were able to pull clear and we had a really close, tough battle. The racing was so close and I really enjoyed it. Coming onto the last lap I was second but I hit a false neutral and I had no time to fight back. It’s a long season and I’ve started with two strong podiums. Thanks to all my supporters. See you at round two!”